Join FREE
Discoveries: Fly Fishing at the Edge of the World 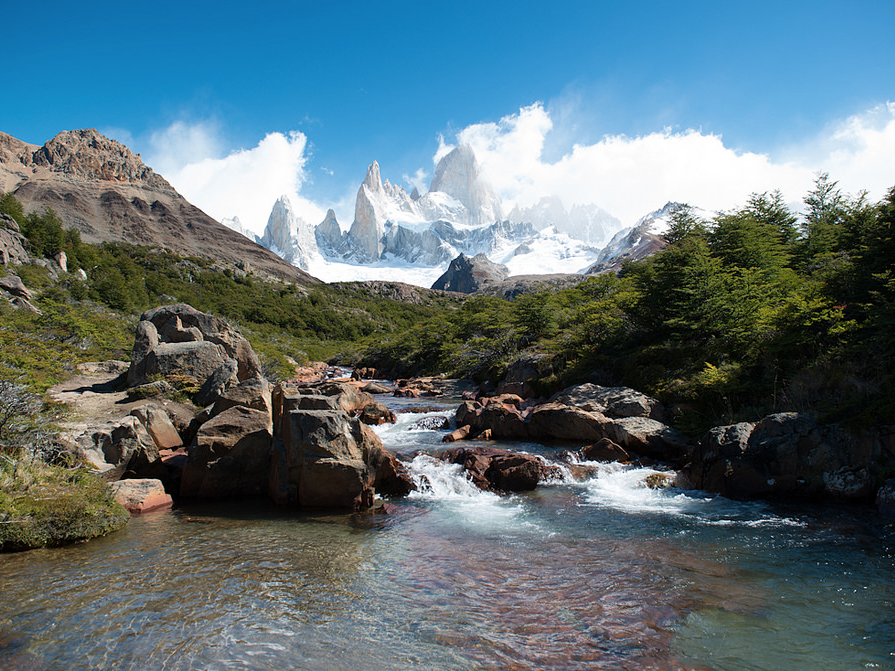 This story is part of Discoveries, a series shining a light on the people and places that expand our minds, dazzle our senses, and feed our dreams. It’s a big world. Discover what it’s all about.

It’s a little after five in the morning, and Patrick Kawahara is rumbling down a dark road in a strange man’s pickup truck. Riding shotgun with a hand-rolled cigarette between his fingers, Patrick stares out the open passenger-side window into the Argentinean wilderness. Fishing poles and tackle boxes rattle around in the truck bed, and the sun has just begun to crack over the jagged looming peaks of the Patagonia mountains. Patrick met the man behind the wheel of this truck all of twenty minutes ago, when he pulled up to his rental cabin in El Chatlén with homemade sandwiches and a whirly grin. Patrick is about to do something quite familiar in a wholly unfamiliar place: fly fish in the glacial runoff of the towering Mt. Fitz Roy, one of the southernmost points on earth.

It’s a far cry from the quiet suburbs of coastal Southern California where Patrick grew up, the kind of place where the ocean air wafts through sighing palm trees and a warm breeze kisses your face every time you step outside. A downside of living in paradise is that every day can start to feel the same, and when you’re a middle-class teenager and bored out of your skull, you have to find things to pass the time before they come and find you. Maybe that means going surfing after soccer practice, heading to the skate park for a study break, or sharing some fries and a spliff with your buddies behind the burger shack by the beach. Patrick and his friends, on the other hand, would drive to the shore at night and fish off the end of a pier. And sometimes, 16-year old Patrick stood alone in the middle of his street, pole in hand, lit by streetlamps and moonlight, and practiced casting for his newfound hobby: fly fishing. 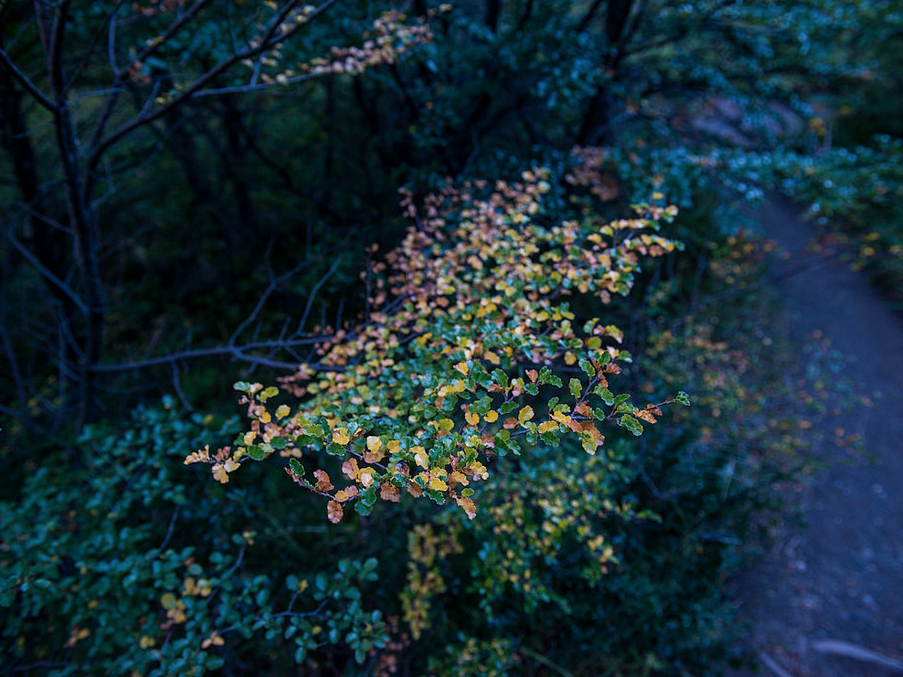 The pickup truck driver, Patrick’s guide for the day, puts the vehicle in park and kills the headlights. By now, the sun has crept up over the top of the 11,000-foot peak of Mt. Fitz Roy and flooded the valley with enough light to see by. They have arrived at Rio Canadon de los Toros, a river made of pure glacial run-off from some of the most staggeringly gorgeous mountains in South America. “I put my waders on and the guide motioned for me to follow him around a bend,” Patrick remembers. “We went for a five-minute hike, turned a corner, and suddenly there’s this rock cliff with trees hanging off the edge, and three deltas breaking off the river.” The water was an impossibly clear shade of spearmint blue, so fresh and vibrant it reminded Patrick of Gatorade. “For 15 minutes,” he says, “it was just me in this river up to my waist, casting my line, the fall leaves blowing around me. And after a while I realized I had stopped fishing altogether. I was just standing still and taking it all in. Then I heard the guide a ways behind me, laughing.”

That laughter, Patrick would soon learn, was not one of amusement, but of recognition. 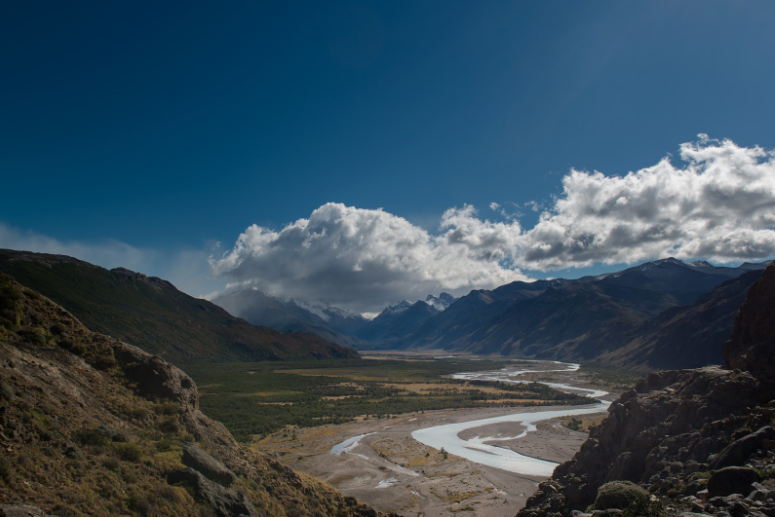 Fly fishermen descend upon the El Chatlén region in such large numbers that a cottage industry has popped up in the tiny town, catering to those that dare to journey literally to the ends of the earth to fish in the water of the Rio Canadon de los Toros. In Tehuelche, one of the Chonan languages spoken in the Patagonia region, ‘El Chatlén’ means smoking mountain, perhaps because the snow-capped peak of Mt. Fitz Roy is so often shrouded in clouds. Patrick’s guide for the day, a kind man with skin weathered by the sun and wind, first came to El Chatlén in 1979, when he was fifteen years old, for what was supposed to be a brief visit. He never left. When the guide told him this story, Patrick understood. “It was one of those transformative moments,” he remembers, “where you’re like, ‘Damn, I’m not the only one who is in love with the power of this landscape.’”

Indeed, trekking to El Chatlén is a huge pilgrimage for those looking to fish, and it’s smart to get a reservation at a bed and breakfast or a room at a lodge months ahead of time. But Patrick had a different approach. “All of the touristy fly fishing excursions were either closed or all booked up,” he explains. “I was at a bus station just talking to some random guy about how I wanted to go fly fishing, and he said in his broken English that he knew someone who could take me. He said ‘Tomorrow, 5:00AM, he’ll pick you up.’ It was like 20 bucks. I didn’t know what to expect.” Sure enough, the next morning, the man with the truck appeared. He handed Patrick a lunch, rolled him a cigarette, and they were off. 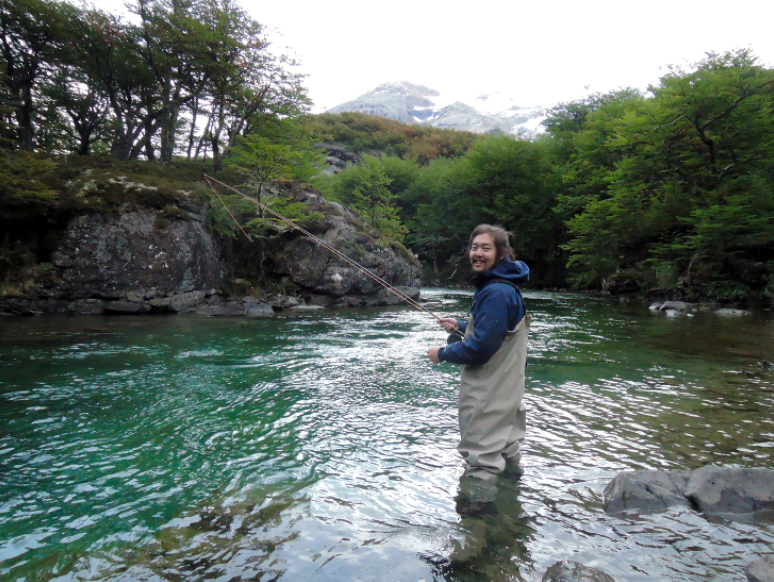 Save for the soft swooshing noise of his Gore Tex jacket sleeve as he cast his rod repeatedly above the water, Patrick was embraced by a peaceful quiet he had not felt in a very long time. “It was probably one of the happiest moments of my entire life,” he says. “I couldn’t have dreamt of a place that looked like that, that even existed at all, let alone a place I could actually go to fish.” Standing waist-deep in the river, the only other sounds around him were the slight cracking and giving of the overhanging trees. Paradoxically, Patrick says it was far from silent but anything but loud. The smell of cold, wet wood filled his nose, not musty or heavy, but as fresh and pure as the water he stood in. As he cast his line out, Patrick saw fish jump out of the water to catch the fly. Other times, the line went straight down, and he’d reel in gigantic brown trout or brook trout. 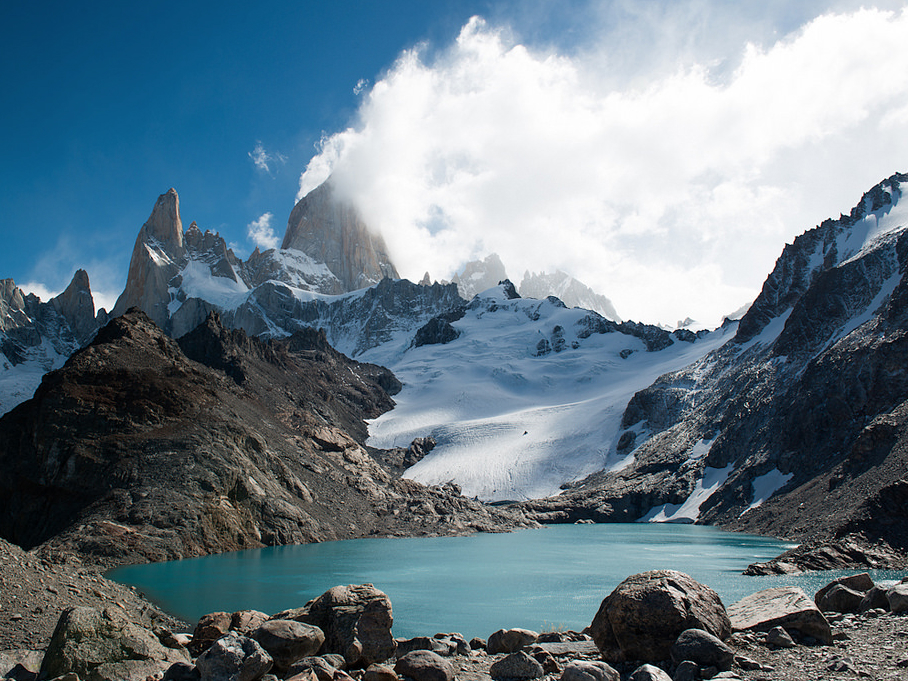 As afternoon approached and the tree shadows lengthened, Patrick and the guide walked along the shin-high waters of the creek bed, marveling at the natural beauty that compelled both of them to journey such a distance. Suddenly, Patrick fell backward into the water. “I just ate it, big time,” he says. “It was so strange, it was as if someone was walking behind me and kicked me in my ankle, and I just went down.” But no one was there. The guide helped him up off his back and pointed into the water. They had walked right into a giant school of fish that were swimming upstream, and one of the fish knocked him in his foot and took him down. Heads (and hearts) in the clouds, they neglected to see the massive creatures squirming between each other in the clear-blue water to get upriver. They too had a place they needed to be. 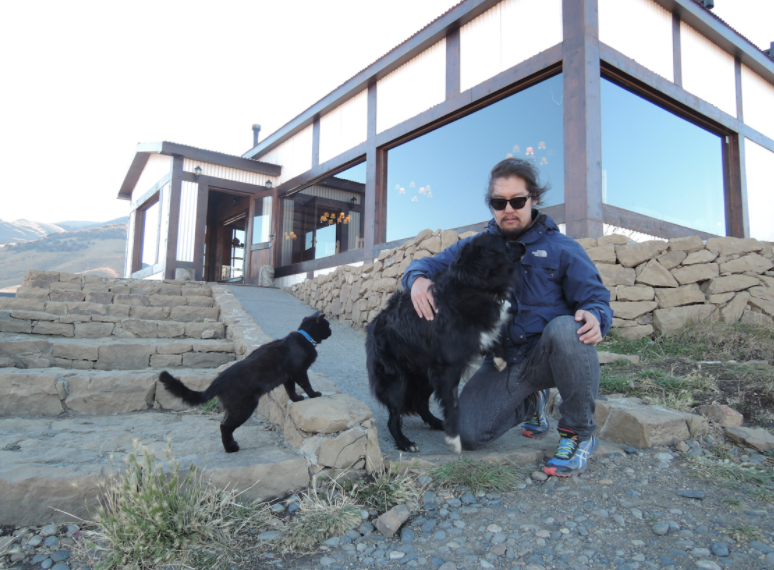 As someone who has fished in Hawaii, Washington, as well as numerous rivers and lakes up and down the west coast, Patrick looks back at his brief stay in El Chatlén as arguably his most cherished fishing memory. It’s a long way from the piers of southern California or the cul-du-sacs of Orange County, where long ago a teenager stood in the dark practicing his casting. Patrick sees the pensive, meditative nature of fly fishing going hand-in-hand with the relaxed, unhurried pace of El Chatlén. Everyone’s free to plan their own excursion as they best see fit, but he wouldn’t change a thing about his chance encounter that lead to such a legendary day of fishing. “If I were to return to El Chatlén,” Patrick says, “I’d go back to that same bus stop.” 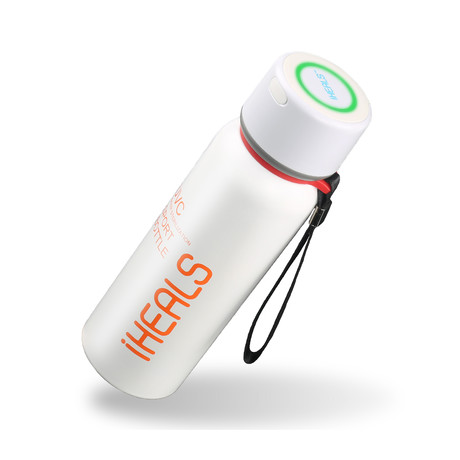 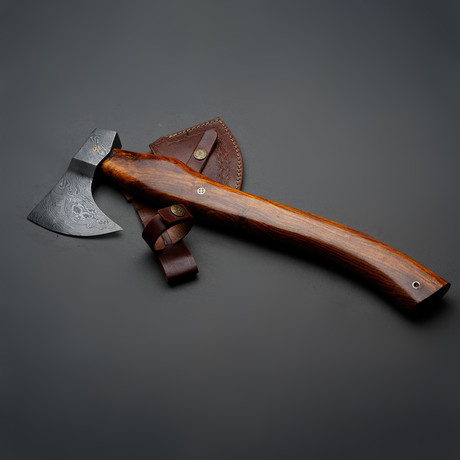 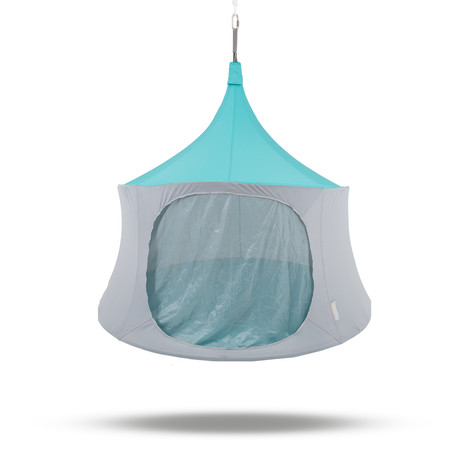 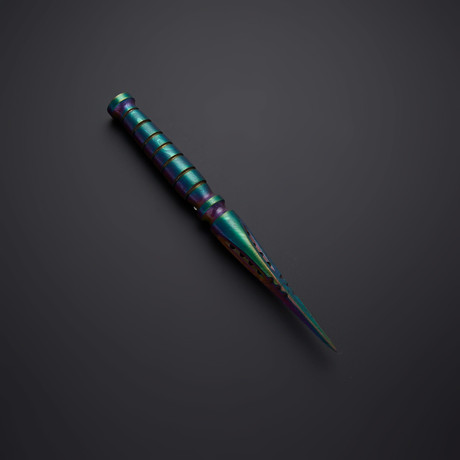