Join FREE
In the Age of Smartphones, How Have Watches Endured? 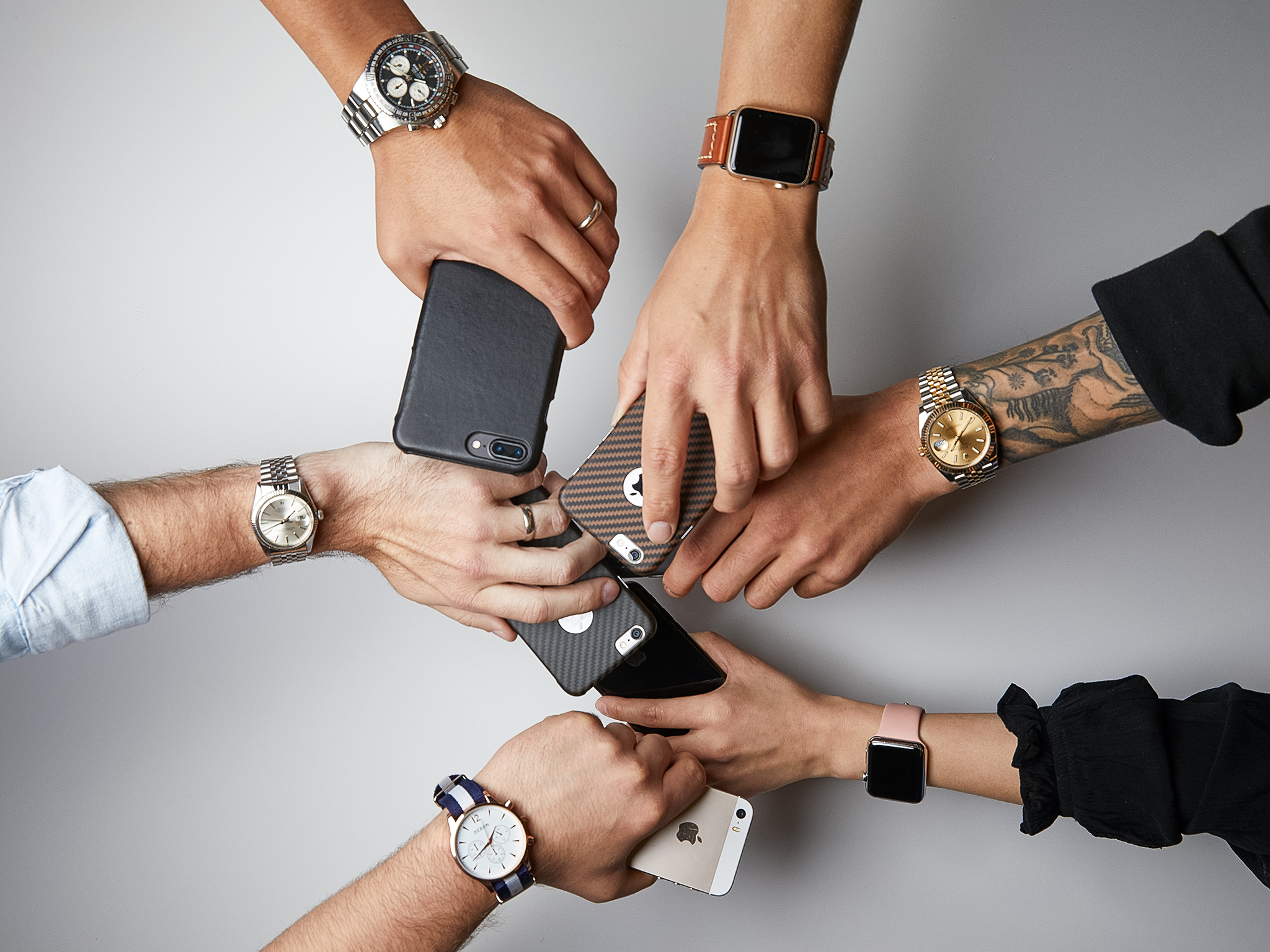 It’s been well over a decade since I last wore a watch. Knowing how many minutes remain until my next meeting is ridiculously easy, seeing as I have a magical internet phone that tells me everything I could possibly want to know, including the time. These days, wearing a watch seems redundant, and in some ways, like a big commitment. After all, the nice ones are a good chunk of change, and plunking down that kind of cash means I’d probably need to wear it every single day to get my money’s worth. But it wasn’t always this way. For those of us who came of age in the 1980s and ‘90s, wearing a watch on the daily was par-for-the-course, as ubiquitous as Rollerblades, Michael Jordan, and a Sony Discman.

Like many people my age, I can trace the point of departure from the world of watches back to when I got my very first cell phone, a silver Samsung flip-phone with an flimsy antenna you actually had to pull out to get decent reception. For context, this was right around the time that Arnold Schwarzenegger was sworn in as governor of California and Apple launched the iTunes store for the first time. It could make calls. It could kind of text. And the time and date glowed from a little window on the outside of the silver clamshell case. Being an early twenty-something at a new corporate job, the forty-dollar rock n’ roll Fossil watch I’d been wearing for the past couple of years didn’t exactly go with my Banana Republic clearance rack suits (neither did my inner conch ear piercings, which I removed the day before my interview and never put back in). New job, new me. And since I was now sitting behind a desk all day, I need only look as far as the upper right-hand corner of my monitor to know how many more minutes until lunch.

Fast forward almost 14 years. I’m pretty fortunate that my current job at Touch of Modern allows me to have a hefty catalogue of watches at my fingertips (not to mention suits being optional). It’s not like everyone walks around here with the power to have any watch at their beck and call, but if you want to give a certain watch a test-drive, it helps to have a sense of who to know and how to ask for it. 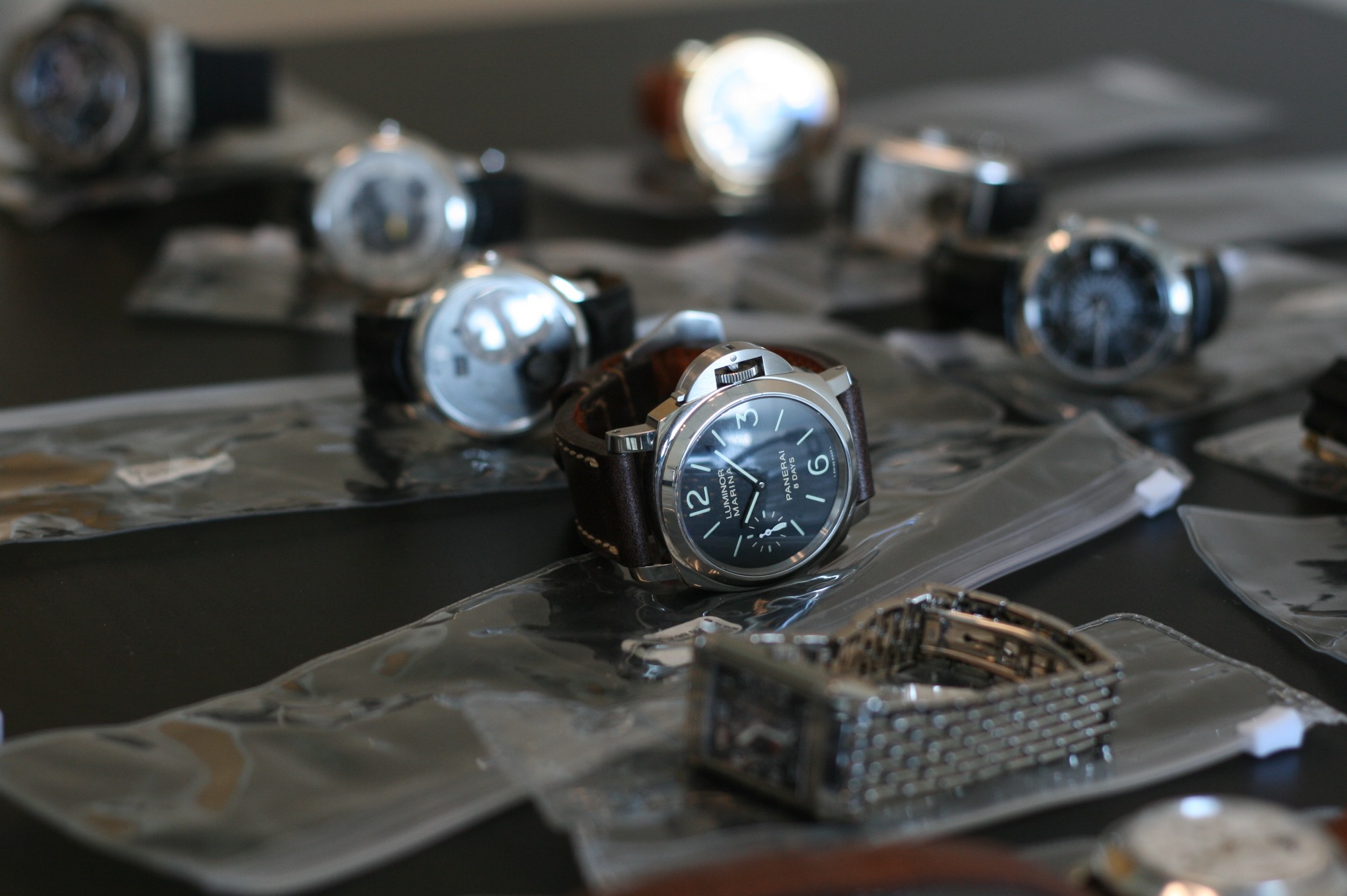 It had been almost a decade and a half since I had done away with wearing watches, and I was informed that pieces from Xeric as well as the Bradley timepiece from Eone were available to borrow. Although everyone can (and does) wear it, the Bradley is unique in that it was designed with visually-impaired people in mind. The tiny metal ball bearings serve as the minute and hour hands and the raised markers on the dial allow the time to be read with fingers as well as eyes. So, had I missed anything? I was about to find out.

We all do that thing before we leave our homes each day. It’s a ritual where we make sure we have our wallet, keys, and phone before we begin our journey. Everyone has their own version of this quick mental checklist that we run through in our heads. I am no different, except on this Thursday morning, about to set out on my commute to work, I have to remember to put the Bradley on, as I am 14 years out of practice. Strapping the piece on my wrist, I feel an immediate wave of nostalgia, and am catapulted back in time to when this was part of my daily routine. How many historic travelers that came before me - astronauts, pilots, Jacques Cousteau - securely fastened their watches before setting out on their own adventures? I had once again joined the ranks of a very specific club. 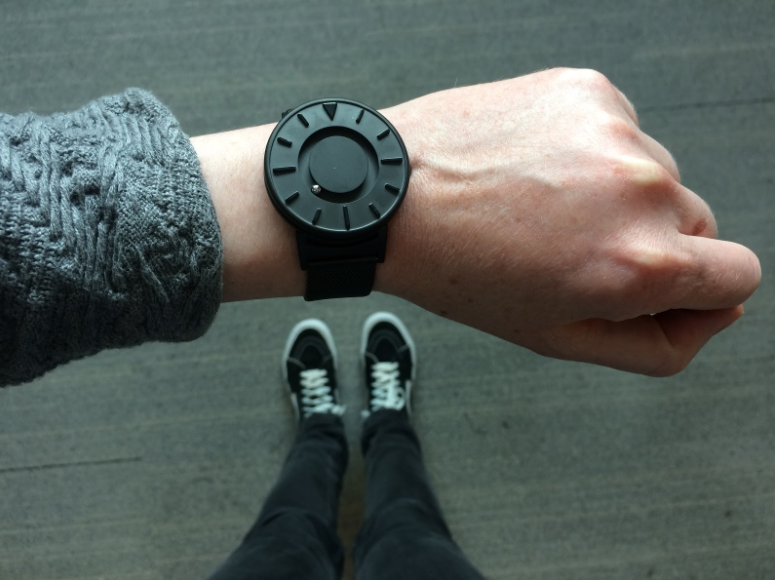 8:13am - And we’re off. I always had a rough idea of how long it took to get from my apartment to the office, but now, I could actually time it. Twenty-eight minutes. Bonus: seeing that San Francisco is unfortunately notorious for the snatch-and-run type of smartphone crimes, my iPhone stayed safely tucked away in my pocket for the duration of my walk, out of sight from any opportunistic thieves.

10:09am - Greek mythology tells us that Atlas held up the sky and all celestial spheres (not just planet Earth, a common misconception) as punishment for siding with the Titans during wartime. That’s some seriously heavy lifting. At this point in the day, I’ve started to notice how well my body remembers having a slightly weighted left wrist. It’s a reminder that I too, have responsibilities, appointments, and promises to be kept, but thankfully not on the same scale as certain mythical Olympians. I haven’t knocked the watch against any door frames either, so my Spidey senses (as far as spatial relations go) have adjusted well, too.

12:35pm - I had lunch with my charmingly accident-prone co-worker Michael, who coincidently was for a period of time also the owner of a Bradley timepiece. What happened? Well, one day he put it in his pants pocket, then accidently put the pants in the washing machine...and the dryer. Needless to say, it didn’t hold up. Michael told me about a time when he served on a jury, and his fellow jurors were fascinated by his Bradley and how different it was from any watch they’d seen before. “It was definitely a conversation starter,” Michael said.

2:37pm - Got pulled into a meeting that I was told would take ‘just a second.’ Foolishly believing these words, I stepped into the windowless conference room with neither my phone nor my laptop. With no clock on the wall, it was like passing into a sealed chamber with no point of reference for how much time was passing. And it was important that I keep track of time because I had a 3:00pm meeting that I couldn’t miss. Normally, I’d feel a little helpless and paranoid not knowing what time it was. But today, in a pleasant twist of fate, I was ready. Fortune favors the prepared, isn’t that how the saying goes?

3:03pm - Attended a large meeting with a manager who is fairly new to the company. I sat toward the back of the room, ready to give him my undivided attention. As the new manager spoke, from my vantage point I observed a healthy sampling of the workforce occasionally pulling out their phones to check their calendar, the score of the ball game, their Bumble messages, etc. Don’t assume for a minute that this action was relegated to just the younger contingent - this habit we have of looking at our phones at the slightest moment of disinterest in whatever is happening in front of us crosses age brackets, genders, and management levels. I couldn’t help but think that simply having a watch would cut down on at least some of that fumbling-in-your-pocket activity. Plus, it would free up our hands and attention spans to give a speaker the respect they deserve. You know, a standard tenet of grown-up society. 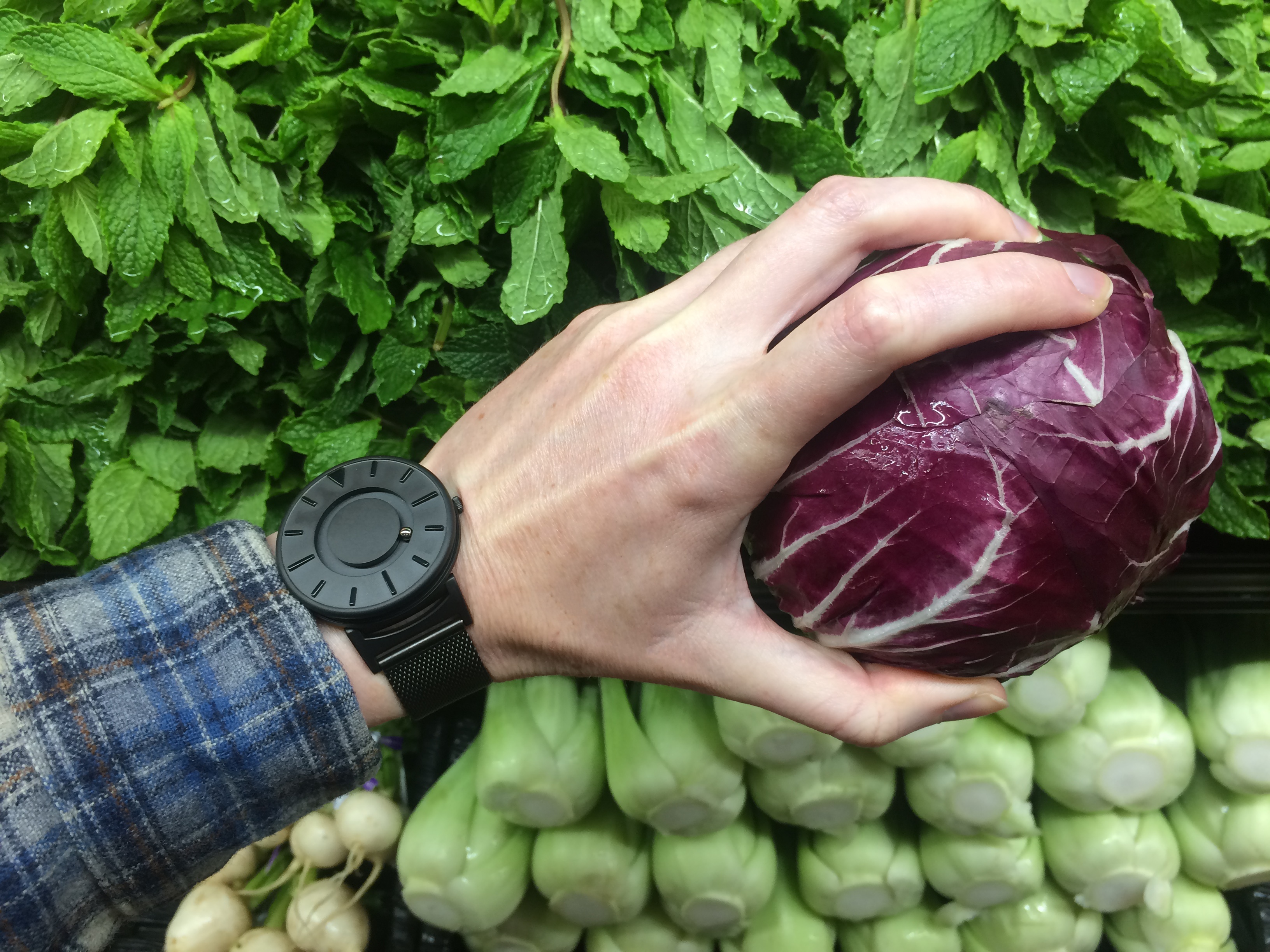 After work I swung by a grocery store on the way back to my apartment. This neighborhood hotspot, which caters to the pour-over coffee crowd and sports an inimitable cheese section, was strikingly empty for a weekday evening. I checked the time - 7:47pm. Well no wonder. Who shops for groceries this late in the day? I was pleased that when my brain wanted to know the time, my arm rose to look at my watch rather than reach for my phone. I was learning already.

Taking the watch off at the day’s end and placing it on the nightstand was a long-abandoned but familiar ritual, like traveling down a road I hadn’t been on in ages. At the same time, it was comforting, as if I were hanging my hat up after an honest day’s work. I definitely see myself joining the watch-wearing world again. And if the Bradley ends up not being my daily wear in the long-term, there's an endless supply of options out there - perhaps a pre-owned Hermes Clipper or a vintage Rolex Datejust is more my speed. See, while I love being connected to the world, I’m less enthused about being anchored to my phone. A watch gave me purpose, an air of responsibility, a place to be, and a time I had to be there by. Wearing a watch made me feel like I had once again joined adult society, like I cared about what I was doing and where I was going. I’d wear a watch not just as a call-back to simpler times, but as a way to show reverence for the future, in sticking to plans, in giving a damn. As it turns out, being in charge of your own destiny feels pretty good. 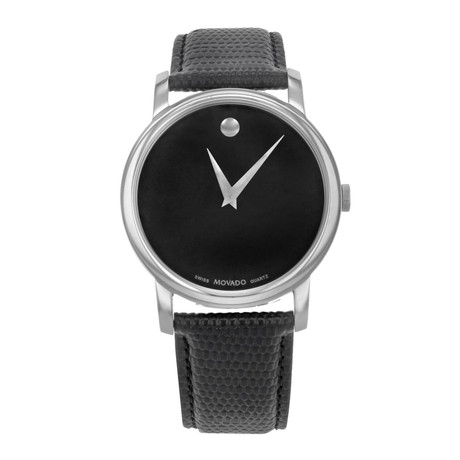 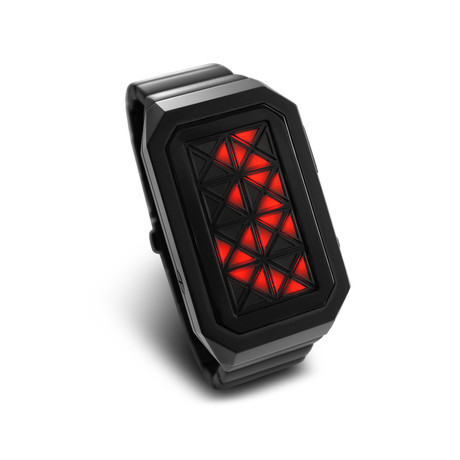 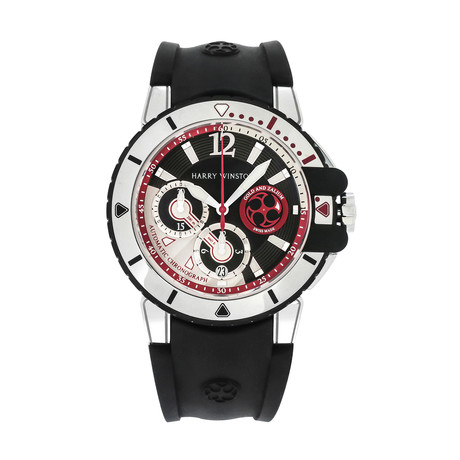 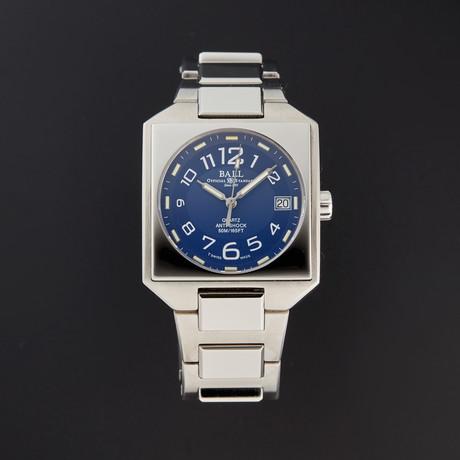