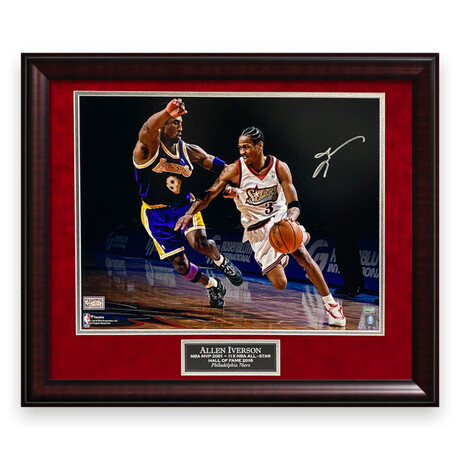 Allen Iverson is considered one of the greatest basketball players of all time. Iverson— nicknamed "The Answer" or "Al"— played a total of 14 seasons in the NBA as both a shooting guard and and point guard. He won NBA Rookie of the Year Award in 1997, was an 11-time NBA All-Star, and was named the NBA's MVP in 2001. Iverson was inducted into the Naismith Memorial Basketball Hall of Fame in 2016 and is regarded as one of the greatest ball handlers in NBA History.

Celebrate one of the greatest players of all time with your very own piece of sports history. This specially crafted autograph display commemorates the legendary athlete who made you a lifelong fan.

— Individually Hand Signed; Exact Location Of Signature May Vary From The Photo