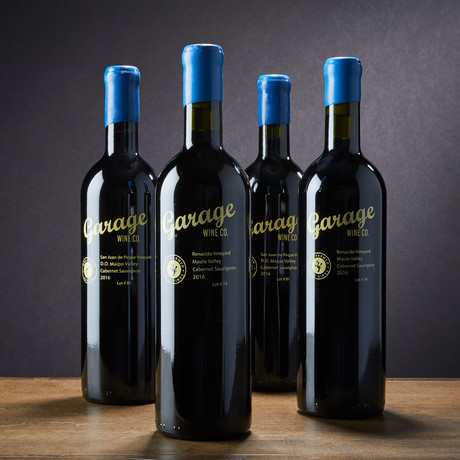 Garage Wine Co. began quite literally in Derek Mossman and his wife Pilar Miranda's garage in 2001. After half a dozen vintages making wine for an informal market of family and friends, the firm was featured in Chile’s El Mercurio newspaper in an article dedicated to the growing grassroots movement of small wine. The firm was referred to as “that Garage Wine Company” and it was too late to change the name, and time to forge an enterprise.

GWCo makes about a dozen different single vineyard wines per year that include mountain grown Cabernet Sauvignon and Cabernet Franc from Maipo. Each wine is from a different place: Caliboro, Sauzal, Truquilemu, Portezuelo – a separate parcel of 1-2 hectares belonging to a small farmer who works with horse and plough as his family has done pretty much since colonial times. The wines are about place not varietal, nor consumer.

Grapes are trucked to harvest in a trailer behind Derek Mossman's trusty pickup, about 2,000 kilos at a time. Winemaking here veers towards the "natural" spectrum. All wines fermented with native yeast, see no additions of any kind, very little new wood, and are low in sulfites. Punch downs are by hand, and pressing is done in a small traditional basket. You may notice slight variation in bottle thickness and shape if you were to open up cases, as Derek Mossman takes recycling to the next level and actually reuses old bottles— bottling in salvaged, used wine bottles in partnership with a recycling company located near the winery. Derek is also the founder of M.O.V.I. (Movimiento de Viñateros Independientes), Chile's exciting, fast-growing association of independent vintners.

"I enjoyed the texture of the 2016 Renacido Vineyard, perhaps a little less elegant but with great character. I looked at my note from the previous year and was very surprised to read that I commented on the texture then as well. I often associate minerality with texture (and/or vice versa), so this has to be an expression of the soil here, an expression of granite. Because it’s Cabernet Sauvignon… 5,000 bottles were filled in November 2017."
— 94 Points, Wine Advocate

The 2016 Garage Wine Co. Cabernet Sauvignon, Lot 81 is from San Juan de Pirque, a single vineyard in the Alto Maipo Valley. At 3,200 feet above the sea, this vineyard is a rare example of Chilean “mountain” Cabernet Sauvignon. The use of native yeast and neutral barrels keeps things naked and transparent. It is rare to experience Chilean Cabernet Sauvignon of this quality without added “makeup"!

“The 2016 San Juan de Pirque Vineyard is a blend of 14 barrels of Cabernet Sauvignon and one single barrel of Cabernet Franc from their Pirque vineyard in Maipo at 946 meters altitude. It follows the general approach here and was naturally fermented with native yeasts in open top fermenters with the caps punched down by hand. It aged in third use barrels over two winters. It has some sweet sensations in the nose, a little lactic hint, with herbs and spices, very Maipo, with the stones but without the mint.” Luis Gutierrez, Robert Parker’s Wine Advocate
— 93 Points, Wine Advocate

— Only Eligible For Ground Shipping
— Expedited Delivery Is Not Available
— Alcohol Cannot Be Delivered To A PO Box
— Someone 21 Years Or Older Must Be Present To Sign For Delivery
— We Recommend Shipping To Your Business Address
— If Visibly Intoxicated At Delivery, You Will Not Receive The Package
— Void Where Prohibited By Law

Due To Legal State Restrictions, Alcohol May NOT Be Shipped to Alabama, Alaska, Arkansas, Delaware, Hawaii, Illinois, Kentucky, Mississippi, New Hampshire, Oklahoma, Utah, Puerto Rico, Guam. If You Provide a Shipping Address that Is One of These States Or Territories, We Regret that We Will Have to Cancel Your Order

WARNING: Many Food and Beverage Cans Have Linings Containing Bisphenol A (BPA), A Chemical Known to The State of California to Cause Harm to The Female Reproductive System. Jar Lids and Bottle Caps May Also Contain BPA. You Can Be Exposed to BPA when You Consume Foods or Beverages Packaged in These Containers. For More Information Go To: www.P65Warnings.ca.gov. For A List of Products Go To: www.prob65bpa.org.

PLEASE NOTE: THIS IS A FINAL SALE ITEM. NO CANCELLATIONS, REFUNDS, OR MODIFICATIONS ARE ALLOWED.