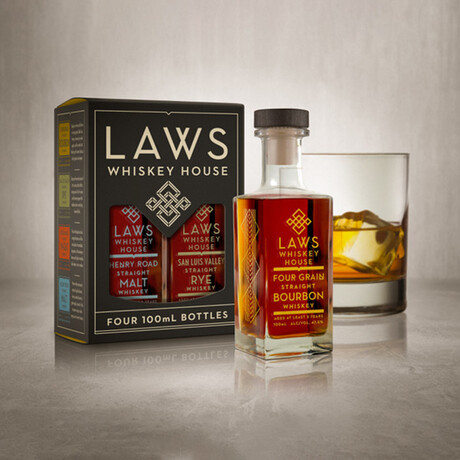 The soulful, rich flavors of their no-compromise whiskey begins with heirloom and heritage grains. Modern agriculture has no interest in these low-yield, finicky grains, yet you could not create the singular profile of each Laws Whiskey without them. This terroir-driven whiskey also benefits from the rarified thin air of Colorado where the hot days and cool nights of the Rocky Mountain region—along with the rugged growing conditions of the San Luis Valley and eastern plains—stress the grains just enough to deepen their flavor.

Laws Whiskey distills every drop of whiskey they bottle. Every mash bill gets its own optimal distillation process utilizing a time-intensive sour mash fermentation. The first Colorado distiller to bottle bonded whiskeys, they believe these steps are not extra—they’re mandatory to creating Laws Whiskey.

Laws Whiskey House wouldn't make a wheat whiskey if they hadn't discovered Centennial, the heirloom spring varietal grown in the San Luis Valley. Unlike commercialized wheat grown nearly everywhere today, the pre-industrial Centennial grain can be distilled and fermented to reveal a spectrum of diverse flavors. With a splash of water or ice cube, Centennial Straight Wheat Whiskey is a true, unadulterated summer sipper. Floral with apple orchard, orange blossom, and lilac and a palate of marmalade, bergamot, wild strawberry, honey, and bright minerality.

The barley in Henry Road Straight Malt Whiskey was literally kept from extinction. Where commercial farmers found it too low yield, Wayne Cody found its unstripped flavor too glorious to let go. Today, his sons continue to grow and malt this barley in a field alongside Henry Road. It is run through on-grain sour mash and aged for at least three years in charred, 53-gallon new American white oak barrels. This whiskey is woven with aromas and notes of apple blossom, honey, toasted hazelnut, green apple, peanut brittle, cinnamon sugar cookie, seagrass, and sweet tobacco.

— Disclaimer: Someone 21 years or older must be present to sign for delivery.