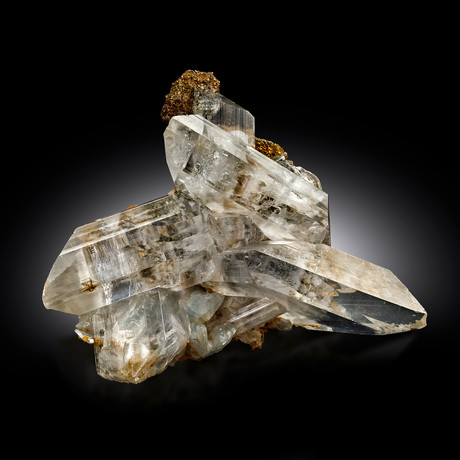 Selenite is named after the ancient Greek word, selēnitēs, meaning “stone of the Moon.” In ancient Greece, people held the belief that certain transparent crystals waxed and waned with the moon. Selenite has been used throughout history for mainly ornamental purposes like sculptures and as a substitute for window glass.

Selenite crystals can be found around the world at varying levels of quality. The most notable are those of Naica, Mexico and the Agrigento Province of Sicily. The Agrigento Province was an extremely rich mineral region of Sicily, Italy. It was the world’s leading sulfur-producing mine throughout the 19th century. Throughout the 20thcentury the mine’s production declined, until it ceased production in the 1980’s. Although the primary mineral being mined was sulfur, there were also exceptional specimens of selenite and pyrite. The selenite found here can be very transparent, and more often than not they are included with sulfur or pyrite.

This stunning selenite example takes on many of the Argrigento characteristics. It is completely transparent without any inclusions. The specimen has formed with several reticulating crystals, which give the piece an interesting sculptural quality. When peering into the crystals it’s as if you are looking into a whole other world.

Selenite is a popular stone metaphysically because of its cleansing nature. Selenite is also claimed to calm, soothe, and bring deep peace and sense of tranquility.