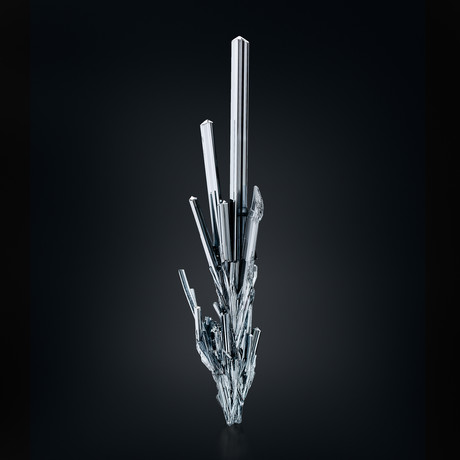 Stibnite is primarily composed of antimony, which has been utilized for over 3,000 years as a component of medicine, an ingredient in beauty products, and even as a treatment against “evil spirits.” The majority of antimony is ore-grade and utilized industrially in metal-casting. It is also used as a flame-retardant additive in various products such as plastics, textiles, rubber and adhesives. When used without the additive of chlorine, it takes on quite the opposite role as an incendiary component in munitions.

As a collector’s mineral, stibnite has long had a cult following for its cool, sleek, gunmetal coloration, high capacity for luster, and its potential for extremely aesthetic, sculptural clustering. The best examples have an otherworldly quality, a perfection on par with machine-made art. They push the boundaries of what we believe can be naturally occurring, inspiring mineral collectors at all levels.

This specimen has the cool, gunmetal tone and reflective, metallic luster for which specimens from the Wuning mine are known. Its crystals are pristine and have smooth, parallel faces that look like mirrored panels. The overall piece has an excellent composition with its elongated primary crystals radiating upwards in an attractive form.

There is also a small grouping of tiny intergrown crystals at its base that are perfectly centered. The smaller crystals provide an interesting texture, while the primary crystals have a sleek elegance. The perfection of its crystals and its form allows it to have a wonderful, impactful presence. Attractive and impeccably balanced, this piece exhibits all of the most desirable qualities of the legendary Wuning stibnite.