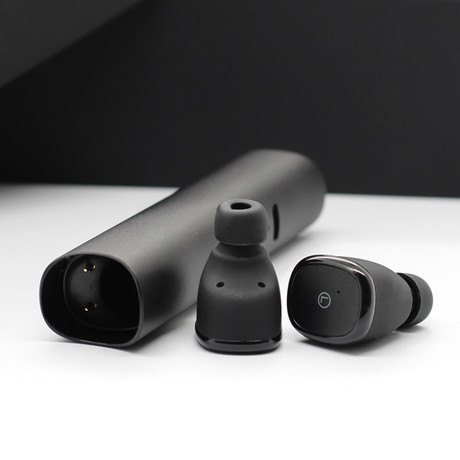 The P4 earbuds automatically pair to each other and your device the moment you remove them from their magnetic charging case. Use them to translate any audio you're listening to, or switch them to two way mode to translate a conversation back and forth in real time. Just share one earbud with the person you're speaking with, and the Aibuds app will translate the source language into the target language and vice versa.

Updated with a smart, modern design and larger battery capacity, the P4 provides 3-4 hours of use per charge. The included metal charging case not only keeps your earbuds secure, it provides 5 full re-charges for your earbuds while on the go. P4 can also function like standard earbuds, so you can use them to listen to music with premium sound and answer phone calls with the touch of a button.

Does this require internet/ data access in real time to work or will it work (Translate) off the grid?

Does this automatically detect what languages are being used or do they have to be set prior to initiating the conversation?

You need to set the language before translating.

Can you select more then one language at a time?

Aibuds have a group chat function and can translate many languages at a time.

Do these also work as regular Bluetooth earbuds?

Yes. You can listen to music, make calls, like the regular Bluetooth earbuds.

Can you use the device by itself without downloading the app or using the ear plugs?

No, you must download the App in order to use the translation feature. There are two modes of translation, which can be done through mobile phones or headphones.

Can it translate phone calls?

No, it's not available to translate phone calls.

Does the translation an audio response in the ear or does it only appear in the app on your phone?

The translation will be both an audio response in the ear and visually on your phone at the same time.

Can you use this for Android phones?

No, it only supports iOS version now.

Will it translate a movie or tv show that I'm watching?

If you hold the phone close to the recording, it can be translated. But it is a paragraph-by-paragraph translation.

Are they water resistant? Are they ok for heavy athletic activity?

Yes, it is suitable for athletic activity. For example, running or jump rope, etc.

Does the translation app have a cost associated with its use?

No, the translation app is free.

Will they work using an iPhone?

Can you use an Apple Watch instead of a phone?

No, it does not support the Apple Watch.

What is the exact name of the App?

The name of the iOS app is "Aibuds".