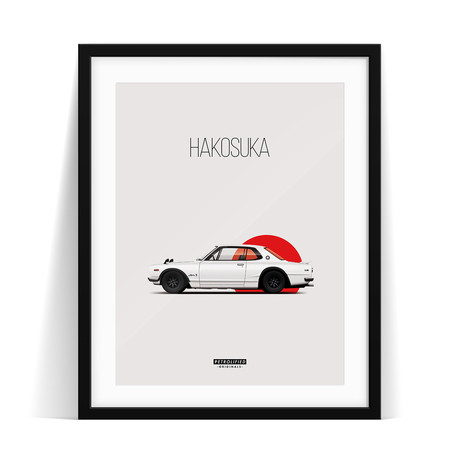 By Martin Miskolci
Sold Out
Login for Price

Despite its very subtle body styling, which differed the GT-R from the regular Skyline with just the badges, the KPGC10, commonly known under the name “Hakosuka” i.e. “Boxy-Skyline”, had more importantly a rather special engine hiding under its hood. It was the S20 straight six taken from the R380 Prince race car that made this Skyline the true (and very first) GT-R ever produced.

The original Skyline’s four-door version, even though very successful on the race track, was dominated by heavy understeer. In order to achieve good lap times, the drivers had to brake late and hard into the apex and drift around the corner. So called “drifting” thus soon became popular among the fans and made the Skyline very popular. Such style wasn’t the most effective or the quickest way to get around, but it sure was a hell of a spectacle.

Martin Miskolci is the guy behind all of Petrolified, from early design to end result. His love of cars has translated to a rare and wonderful thing: realizing a passion project. His work started in fall 2013, on what was to be a simple project bringing automotive inspired art to the masses. His very first poster was the infamous "Wall of Wheels" print, that brought him out to the public, but it was the RWB collection that got him the desired attention of you, the car enthusiast out there.