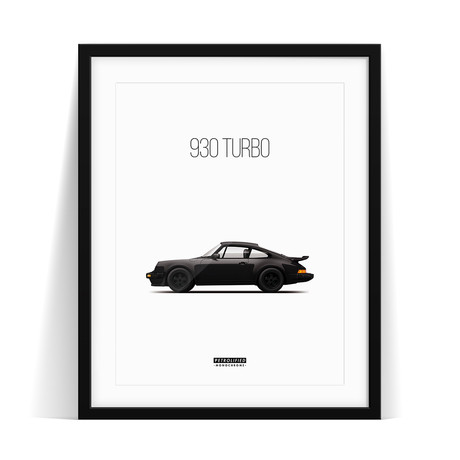 By Martin Miskolci
Sold Out
Login for Price

The 930 Turbo is a fine example of racing technology being successfully implemented into road going cars. This time, the game-changing technology was turbochargers. Although such forced induction was nothing new in the paddocks of tracks they were quite new on the streets, and even though Porsche wasn’t the first one to bring them to production, it might have been the first one to do it right.

Porsche started experimenting with turbocharging back in 1969, boosting the factory 2 liters, but it wasn’t until a few years later that the technology made its way into production. On the track it was a different story. First Porsche turbocharged engines were those of the flat-twelve 917 race cars, pushing around 1,200 horsepower. With such advancement and knowledge, Porsche had little problems taking it into production. And so it did in 1974. With the familiar 911 looks but a few tweaks to set it apart, the 930 certainly was a looker.

Martin Miskolci is the guy behind all of Petrolified, from early design to end result. His love of cars has translated to a rare and wonderful thing: realizing a passion project. His work started in fall 2013, on what was to be a simple project bringing automotive inspired art to the masses. His very first poster was the infamous "Wall of Wheels" print, that brought him out to the public, but it was the RWB collection that got him the desired attention of you, the car enthusiast out there.