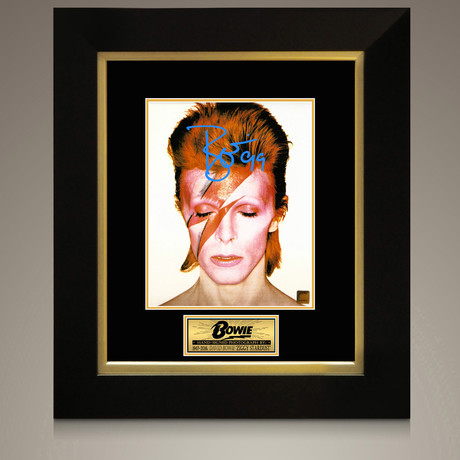 Music is an Art of sound in time that expresses ideas and emotions. Music is Life, and it often defines us. This specially-curated collection from RARE-T features a staggering array of authentic, hand-signed posters, photos and props featuring autographs from your favorite bands and musical artists.

Pay homage to one of the most iconic and influential Music artists of all time, David Bowie, with this gallery-framed Hand Signed photo by the late, great David Robert Jones, known professionally as David Bowie. He was a leading figure in the music industry and is considered one of the most influential musicians of the 20th century, acclaimed by critics and musicians, particularly for his innovative work during the 1970s. His career was marked by reinvention and visual presentation, with his music and stagecraft having a significant impact on pop culture. During his lifetime, his record sales, estimated at 140 million albums worldwide, made him one of the world's best-selling music artists. In the UK, he was awarded ten platinum album certifications, eleven gold and eight silver, and released eleven number-one albums. In the US, he received five platinum and nine gold certifications. He was inducted into the Rock and Roll Hall of Fame in 1996. The triple matted display is mounted in a high-quality wood frame with metallic filet trim and finished with protective glass to keep it looking pristine. The customized descriptive metallic plaque, in addition to the detailed finishing and openings, add to the elegant and sophisticated gallery quality look.

Proudly commemorate the contribution of this legendary artist to music history ! Complete with a serialized certificate of authenticity and verifiable numbered hologram, this piece is an exciting investment that will only get better with age.