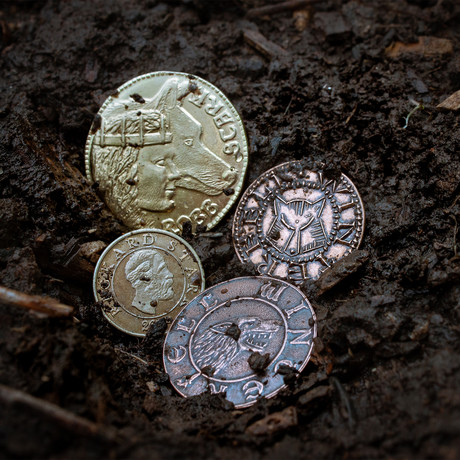 This set of four coins features the recent and historical Northern rulers from House Stark of Winterfell. Once the ancient Kings of Winter, the Starks are still the most powerful house in the North, with many of the lesser houses sworn to them. These coins were made for distribution around the North and were probably never seen in the southern parts of Westeros.

Eddard "Ned" Stark was head of House Stark and Warden of the North. This Eddard Stark Half-Groat coin was struck for distribution within the North. It features Ned uncrowned, in subservience to the Iron Throne, with the direwolf sigil of House Stark on the reverse. The Half-Groat denomination is worth 2 copper Pennies.

This small Rickard Stark Half-Penny coin features Rickard Stark, the father of Eddard Stark and Warden of the North before him. He was murdered by King Aerys II Targaryen. It was partly this that pushed Eddard to join Robert Baratheon during Robert's Rebellion.

Torrhen Stark, The King Who Knelt, was the last King of the independent North Kingdom. He battled against Aegon I Targaryen, but ultimately bent the knee. The Torrhen Stark Penny coin features a stylized version of Torrhen and the direwolf sigil on the reverse.

Robb Stark, son of Eddard, rebelled against the Iron Throne after Robert and Eddard's deaths. He proclaimed himself King in the North and fought for independence. This Robb Stark Half-Dragon depicts him with his direwolf Grey Wind.

— NOTE: Each coin is treated to look as if it has been handled and circulated. Coloring and patinas will vary, so no two coins look exactly the same.