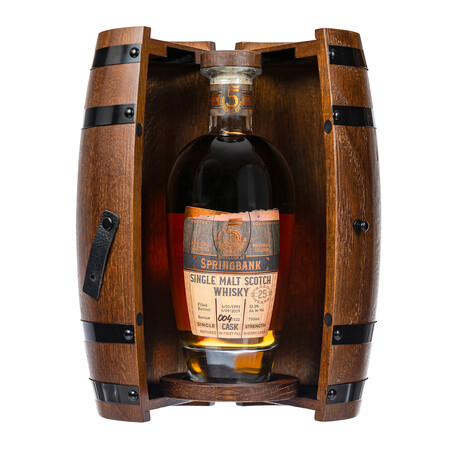 The Perfect Fifth prides themselves on curating and selecting the finest single cask whisky that has remained hidden or has been forgotten about over time. They scour the untapped inventories of distilleries all over the world with a single goal in mind: to unearth rare and exceptional whisky and share it with those who most appreciate it. When you enjoy a bottle from The Perfect Fifth, you are truly enjoying a unique part of history.

The Springbank Distillery is a family-owned single malt whisky distillery on the Kintyre Peninsula in western Scotland. Licensed in 1828, Springbank is one of the last surviving producers of single malt whiskeys in Campbeltown, an area that once had over thirty active distilleries. The distillery produces three types of peated and unpeated malt whiskey that it bottles under three distinct brands. Their commitment to traditional, exacting methods of whiskey production has earned Springbank a reputation for producing some of the finest malts in Scotland.

Campbeltown Whisky is known for its dryness and sometimes pungent taste because of its location—the region sticks out of the mainland and is actually closer to neighboring islands Arran and Islay than any other mainland producer. The region is relatively small, yet the distilleries produce very different whiskies from one another, Glen Scotia produces typically light and grassy whiskies, whereas Springbank is more robust and heavily smoky.

This venerable 25 Year Single Malt is reminiscent of the Springbank 25 year olds of the early 1990s. Characteristic of Campbeltown whiskeys, salt dominates on the nose, followed closely by the rich fruitiness notable in Springbank whiskey, offering up dried apricots and spiced pear. Peaty notes creep up slowly, as the coastal style makes an impact with smoky, chocolate rich notes on the palate. A rich, oily middle and a long finish, the richness complemented by lighter lemon notes and barley sugar.

Tasting Notes From Jim Murray's Whisky Bible 2020
— Nose: Anyone who remembers the old Springbank 25-year-olds of the early 1990s will recognise this aroma as a direct descendent – indeed it is near enough identical in both weight and character. The huge, nuggety oak is faultless (this must have come from a cask which had been seasoned in the old – virtually lost – style). Salt dominates but there are dried apricots and spiced pear, too. Meanwhile the vaguest of peaty notes (and I mean the odd atom here and there!) teases away as a barely audible background noise, which automatically becomes louder the moment you spot it.

— Taste: A malt on the threshold of perhaps dallying too closely with the oak. But that coastal-style bite makes just the right contact with the salty tannins and cocoa laden phenol to make a course for more complex and satisfying port. Just enough oil makes the middle rich and promises a long finale.

— Finish: Drier, as is to be expected, as the tannins raise their game. Still salty, but a little barley sugar and lemon juice lightens the intensity, though – happily, by not too much; the residual oils ensure the finish is of extraordinary length.

— Balance: A real return to the past here with Springbank in its most full-bodied, uncompromising and complex style which those of us who discovered the distillery in the 1980s remember with great affection.