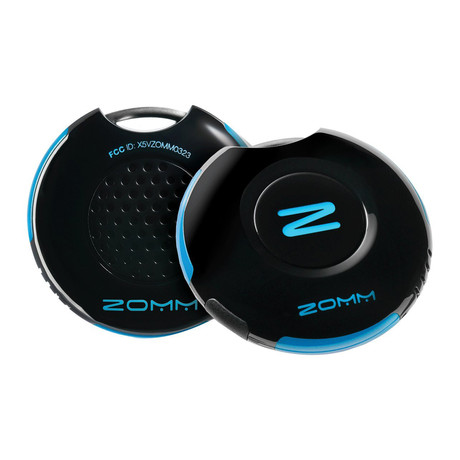 By Laurie Penix
Sold Out
Login for Price

ZOMM is the world’s first Wireless Leash for your phone. Add it to your keychain and it will notify you when you leave your phone behind, alert you to incoming calls and even provides full mobile speakerphone functionality. It also has a panic alarm that can call for emergency assistance from anywhere in the world with just one press of a button.

The Safe Driving Kit includes a quick-release keychain so that you can mount your ZOMM in the visor clip or charge it while driving. Plus, it's perfect for hands-free conversations.

Laurie Penix always thought about ideas for working smarter, not harder. It was in one of these moments that she was asked for a spare phone and had an idea. She had recently read an article on Bluetooth® technology and thought of using its 30-foot range to create a “Wireless Leash™” for mobile phones, a device that would alert users anytime they left their cell behind.
Since the idea came from her kids always losing phones, the name was similarly inspired by her three children, but she was sure not to leave herself out. ZOMM stands for Zac, Olivia and Madison's Mom. As she shared the idea with her friends, stories started pouring in about how many people had lost their phones, and she realized how useful this device could be. ZOMM was released in 2010, winning a CES Innovations Award.